Saturday’s headline band will be The SteelDrivers, a Nashville-based bluegrass group that has been nominated for several Grammy Awards and won for Best Bluegrass Album in 2015. On Sunday, eight-piece soul band St. Paul & The Broken Bones will perform in the headliner spot.

“We are stoked that our two headliners from 2021 were able to commit to this year’s festival,” said SMLRCC Executive Director Andy Bruns, noting the event was canceled the past two years due to the pandemic. “It’s going to be an amazing weekend of great music, wine, food and artisan vendors – all along the shores of stunning Smith Mountain Lake.

“St. Paul & the Broken Bones is a musical powerhouse that’s performed at such acclaimed festivals as Coachella, Bonnaroo and Lollapalooza,” Bruns said. “I just caught them on the Jimmy Kimmel show a few weeks ago. We couldn’t be more thrilled to welcome them, and the other super talented performers, to the lake.”

Also slated for Saturday are The Suffers, a soul band from Houston that blends elements of classic American Soul and rock and roll to crowds that love to dance. Local favorites The Eric Wayne Band and Blueprint round out the lineup.

North Carolina-based brass funk band Empire Strikes Brass and Three Sheets to the Wind, a popular yacht rock band from Richmond, will open up for St. Paul and the Broken Bones on Sunday.

Bruns said a new addition to the festival this year is a dedicated dining area with local restaurants offering “a taste of SML.”

“Our restaurant members are excited to showcase their fare to the festival attendees,” Bruns said. “The variety will ensure there’s something to please everyone’s taste buds.”

In addition to numerous Virginia wineries, the festival will showcase a number of California wines for the first time, Bruns said. Festival attendees may also browse the booths of dozens of quality artisan vendors.

Tickets are on sale now at smlwinefestival.com and Bruns said he expects both days to sell out. General admission tickets are $65 and VIP tickets are $195. In addition, a limited number of boat slips may be rented for $95 per day.

“For the ultimate experience, patrons can upgrade to VIP tickets to enjoy a special viewing area, gourmet meals catered by The Landing Restaurant, complimentary drinks and access to an indoor, air-conditioned space with private restrooms,” Bruns said.

The Wine Festival is the Chamber’s largest non-dues fundraiser with proceeds used to grow and develop programs to promote tourism and business in the lake region. For more information, log on to smlwinefestival.com or contact Bruns at 540-721-1203 or abruns@visitsmithmountainlake.com. 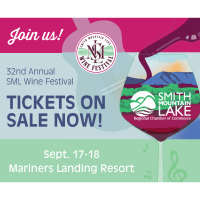